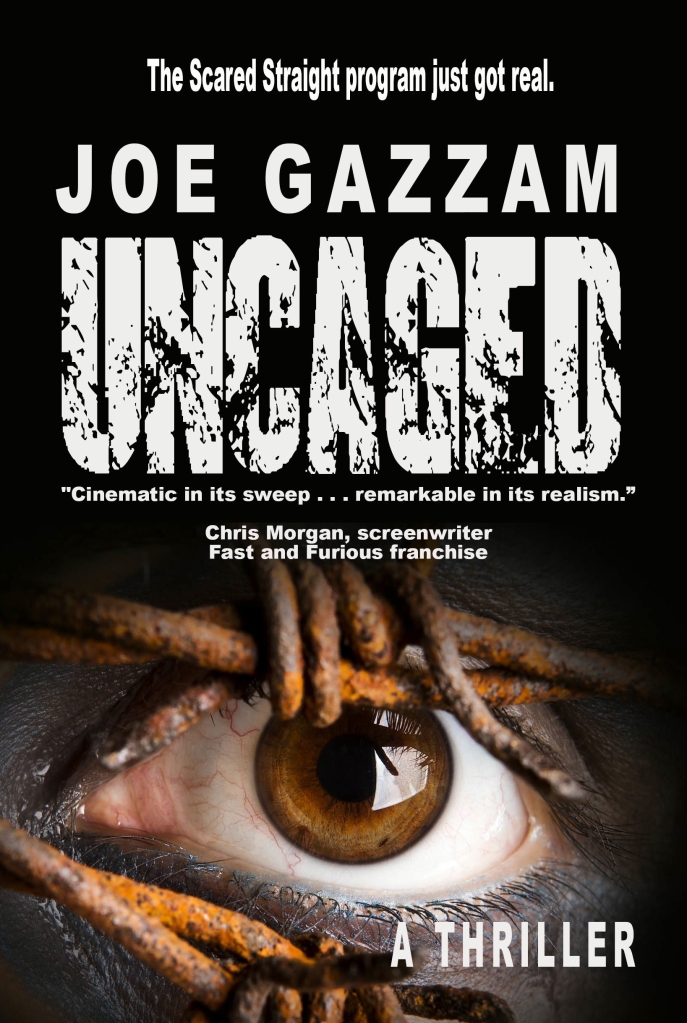 Some of my favourite discoveries this last year have been accidental, and that is certainly the case with the talented author we are featuring here today. Please give a huge welcome to author Joe Gazzam. I think there is a good chance this will not be the last you hear from him. I’m pretty good at these big future judging games, no?

Tell us a little bit about you and your work.

I was born in Baltimore, MD, grew up in Fort Lauderdale, FL and graduated from the University of Florida. Soon after college, I moved to Los Angeles with one script under my arm, never having been to California in my life and literally knowing no one. Since then, due to good luck and the support of friends and family, I’ve been a working screenwriter (21 Jump Street,  Barbarella,  Step Up: Revolution, Anubis Tapestry) for 8 years. I currently live in Southern California with my wife and son.

My work falls into two categories novels and screenplays. But yet, the content is pretty similar. I gravitate toward grounded, action-y Young Adult stories.

I just think YA fits me the best. I have a hard time reading books that take a long time to get going or spend inordinate amounts of time describing non-essential stuff. If you take five pages to describe how sunlight hits off a tin can, I’m probably not going to keep reading.

With screenwriting you ALWAYS have to be moving the plot. In fact, if you have a scene that doesn’t forward the plot in some way – you better delete it. YA, in a way, is somewhere between a long drawn out novel and a screenplay. It’s very much about character, mood and such, but you better keep it moving. I love that.

What first gave you the idea for your book “Uncaged?”

The story came out of my own, unmitigated fear of prison. Prison and sharks pretty much scare the crap out of me. The prison part, stemmed from an old documentary I watched when I was probably way too young to watch it. My dad had it on an old videotape; it was called “Scared Straight.”

Named, obviously, after the program (the same program in my fictional book). It was this program for repeat juvy offenders — kids they couldn’t get to stop committing crimes. They’d put them in a real jail for a day and these real convicts would explain (in the most terrifying manner ever) what life would be like in prison if they ended up there.

It honestly gave me some of my worst nightmares growing up. And that seed just stuck in my head. So when I decided I wanted to do a YA thriller – it was already there.

In the documentary, as scary as it was, those convicts were all volunteers. Guys who had a new attitude and wanted to help reform these kids. So there was always an imaginary line you knew they couldn’t cross. No matter how much they threatened these kids, you knew they weren’t really going to hurt them.

But, in my head it was always – what if that imaginary line was gone. What would it be like to be one of those kids in the most terrifying place on the planet with some of the most dangerous people on the planet? And the writing pretty much flowed from that.

What has been the most difficult part of publishing/marketing your work?

Getting word out. I guess this is everyone’s problems if you go with a small publisher. They really have no marketing budget to speak of, so it rests mostly on my shoulders.

I’ve been pulling what strings I can – getting some celebrities to tweet it out, doing a couple radio shows, and a few interviews for smaller papers. But it’s really tough. Now with self-publishing (which I think is great) – there’s so much noise in the system. It’s hard to get people’s attention.

Have there been any surprises for you in how the book has been received?

Yes! Now, this is going to sound totally self-serving, but just the overwhelmingly positive response and reviews. I honestly expected to just have some people just hammer me. You always hear the horror stories of people that are just brutal on the internet. Just to be mean.

But all but one of my reviews on Amazon have been 4 and 5 stars. The only 3 star I’ve had so far, the guy was actually really positive about the book.

I know the ugly one is coming and I’ve prepared a fetal position to drop into when it hits. I know it’s gonna be tough, you put your heart and so much time into the writing, but the truth is — not everyone is going to like it.

Do you have another work in progress?

I just finished two screenplays, one for Disney (Disney’s Hawaiian Adventure) and one for Universal (It Takes a Thief)

And I just finished the first draft of a new YA series that I’m really excited about. It’s basically a big, fun blockbuster movie in book form. It’s been so much fun to write. It has everything in it – romance, action, thrills. I can’t wait to get it out there. Plus, I’ve been dying to write a series. “Uncaged” is sort of a self-contained story. It would be tough to pull another book out of it. But this new series I could write for a long time.

Where can we find you and your work?

Here are a few ways…

“UNCAGED” can be purchased:

12 thoughts on “Get to know Author Joe Gazzam”